On 7 December 2008, the Chinese National Commission for UNESCO and the Shenzhen Government jointly held a press conference in Beijing, and officially released the news. Shenzhen's success in winning the title of "City of Design" indicated the global community's recognition of Shenzhen's long-standing adherence to the strategy of independent innovation and developing cultural and creative industries.

On 19 November 2008, Mr Koïchiro Matsuura, the Director-General of UNESCO, approved Shenzhen to join the UNESCO Creative Cities Network (UCCN), as the first "City of Design" in China and the sixth one in the world recognized by UNESCO.

On 28 May 2008, the applying team went to Beijing to report related business. Zhang Xinsheng, then the Director of the Plenary Meeting of the Party's local committee and the Deputy Minister of Education, said after hearing the report that he would fully support Shenzhen and clearly pointed out that Shenzhen's applying to join the UCCN was a "State Act". The Plenary Meeting soon organized an expert meeting, and then sent a formal letter to UNESCO to recommend Shenzhen as a city representative for China to apply for the "City of Design".

The applying team made and implemented the applying work plan, public relations plan, and the publicity and promotion plan; they sent more than 100 communication letters to UNESCO within half a year, actively carried out public relations and publicity work, directly or indirectly contacted all key institutions and key figures, and won their support. What's more, it took only about a month for them to complete the revision, design and printing of the Chinese and English versions of the applying report of high quality, and they went to Paris to submit the report in May 2008.

According to instructions from Guangdong Province and the Shenzhen Municipal Party Committee, the city of Shenzhen formally established the Application Steering Group in April 2008 and formed its task force led by the Publicity Department of the Municipal Party Committee. This task force was operated by the Newspaper Group, with participation of some member organizations of the Steering Group such as the Foreign Affairs Office, Cultural Affairs Bureau, and Federation of Literary and Art Circles.

Background of the Survey

As a bridgehead for China's reform and opening up, Shenzhen is considered to be the birthplace of the country's modern design concept.

In 2003, Shenzhen took the lead nationwide in establishing a cultural city strategy and decided on the prominent position of culture in the overall development strategy of the city. On December 7, 2008, Shenzhen was officially designated by UNESCO as China's first and the world's sixth City of Design in the Creative Cities Network. Shenzhen Design has become a bright business card for the city, and the design industry has become an increasingly powerful starting point for Shenzhen to transform its economic growth mode and achieve innovation-driven development.

In March 2018, a top leader of Shenzhen inspected the city's creative industries, and called on the city to build stronger time-leading Shenzhen brands with a global vision, and build a global innovative design capital at a high starting point and with high standards. He also asked the city to implement the Shenzhen Brand strategy in depth, and enhance the international reputation of the Shenzhen Design Week, the Shenzhen Global Design Award and other events.

In recent years, design has gone beyond professional groups to the society and the public in Shenzhen, has gradually become part of the life and aesthetics of the citizens, and has been a basic appeal for improving the quality of personal life. However, Shenzhen has always lacked an authoritative and city - wide statistical survey of the entire design industry. At the beginning of 2018, led by the Shenzhen City of Design Promotion Office and other departments, the Shenzhen City of Design Promotion Association (SDPA) started this survey in the whole city on Shenzhen's design industry, hoping to accurately grasp the current situation and development trend of Shenzhen's design industry through this scientific, comprehensive and detailed statistical survey.

Implementation of the Survey

In August 2018, with the support of the Shenzhen City of Design Promotion Office, the Shenzhen City of Design Promotion Association asked the Shenzhen Municipal Market and Quality Supervision Commission to provide basic information for the Shenzhen design industry, namely, the basic information about the enterprises in Shenzhen in the normal registration status and with business involved in the design industry (including but not limited to brand design, graphic design, advertising design, architectural design, interior decoration design, fashion design, industrial design, stage aesthetic design, animation design, and software design) as of June 30, 2018. The basic data included: the unified social credit code, the name of the business entity, the residence, the legal representative, the subscribed registered capital, the business nature, the industry category, the date of establishment, the general business items, the contacts and contact information.

After the information was gathered, the researchers conducted classification and statistical analysis.

Major Findings of the Survey

Figure 1: Distribution of the Number of Design Enterprises in the Districts of Shenzhen

Figure 2: Distribution of the
Categories of the Design Enterprises in the Districts of Shenzhen

At the same time, the statistical results show that in the past 36 years, the number of newly established design enterprises in Shenzhen basically maintained an upward trend. With the development of time, the increase became larger and larger, and a very rapid growth began in 2010, reaching a climax in 2016. The details are shown in Figure 4.

The business fields of Shenzhen's design industry have been expanding with the time, and the number has been increasing. Among them, the top five in terms of quantity increase were: wholesale and retail; leasing and business services; information transmission, software and information technology services; resident services, repair and other services; culture, sports and entertainment. The development trend of Shenzhen design enterprises' business fields can be seen in Figure 5. 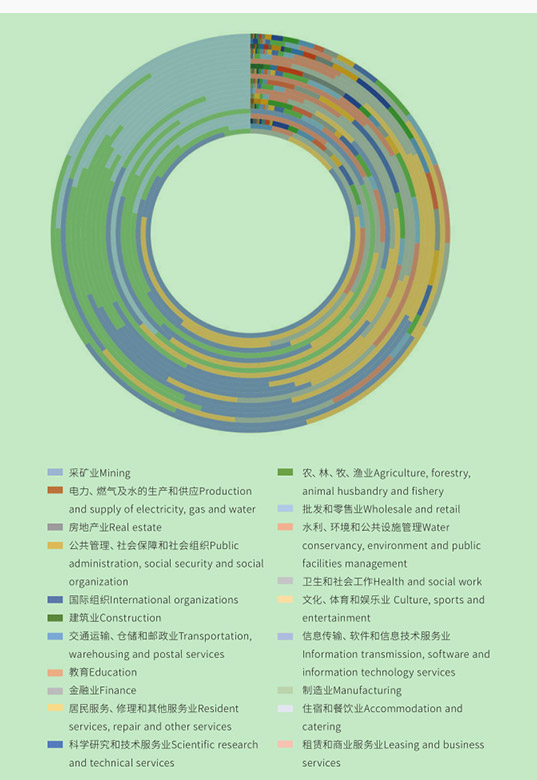 The purpose of the SDAY is to reward the efforts of young designers who, through their creativity, have made outstanding contributions to making cities more environmentally friendly and more livable, making society more harmonious, making development more sustainable, and, above all, making human lives better. Meanwhile, the SDAY aims to encourage the exchange between young creative talents from different countries, the cooperation between the Creative Cities, the sharing of those cities’ experiences and ideas for developing creative and cultural industries, the production and sale of creative design products, and the promotion of design thinking.